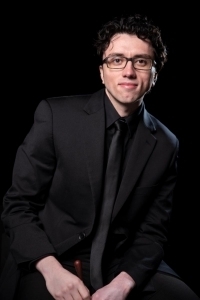 After a year-long search, we’re thrilled to introduce you to our new Music Director and
Conductor—Jacob Scherr! Having interviewed and auditioned some of the most talented band
conductors from around the Northwest, we chose to have Jacob’s baton leading us into our
2019-2020 season and beyond.
Jacob Scherr is recognized as one of the most dynamic, young conductors on the podium today.
A passionate educator, Jacob has been the director of bands and orchestras at Mt. Vernon High
School since 2009. He earned his degree in Music Education from Western Washington
University in 2009 and later earned a Master’s in Conducting from the American Band College
of Sam Houston State University.
In 2008, Jacob co-founded the Whatcom Wind Ensemble, a community band located in
Bellingham, Washington. He lives in Mt. Vernon with his wife and son.
Come see Jacob and the rest of the Washington Wind Symphony in action in our first concert of
the 2019-2020 season, at 2:00 pm on Sunday, October 27, 2019 at the Redmond Performing
Arts Center!